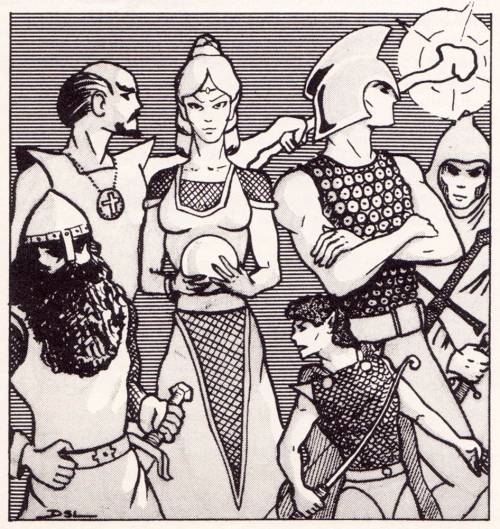 I’ve been circling around the question of ‘character options’ for OSR style games for a little while now. My players seem to appreciate small custom perks, beyond what the B/X bare bones class progression provides. Up to now, we’ve been using a very loose system of ‘character knacks’-- every few levels, the players come up with a niche skill that grants a small bonus to an ability check within its purview. It’s gone fairly well. Knacks make leveling up a little more dynamic, but I’ve found their use within the scope of play is somewhat limited (it's maybe once every three or four sessions that a knack seems to be useful). Now that I'm planning a new game, I wanted to design a system of modular character options that were a little more structured, a little more powerful. Something closer to what we might normally think of as ‘feats’ from later editions, but working within the scope of B/X mechanics. After a few days of tinkering, I’ve come up with the beginning of a feat-like system for B/X and OSR retroclones. I call them Boons. It’s a skeleton of a system and will definitely see some expansion and tailoring, but here’s the start of something.

Progression: Characters begin with 1 Boon at 1st level. This Boon can be selected from the appropriate class category, or the 'Adventurer Boons' list, which is available to all characters. Every 3rd level (3rd, 6th, 9th, 12th, etc.) a character can take a new Boon.

Mastering Boons: Many Boons can be taken twice and therefore ‘mastered’. Mastered boons often grant a further increase of benefit through additional advantage dice, or an increased numeric bonus.

Advantage Die: A Boon will often call for an ‘advantage die’ to be rolled, within the scope of its effect. In this case, add an additional die of whatever die type is being called for by the general rule. Roll the total dice, discard the lowest showing die in the group, and keep the remaining highest dice. If two ‘advantage dice’ are being called for, discard the two lowest facing dice and keep the remaining highest dice. [Note: in the case of tests where “lower is better”, this logic is reversed.] 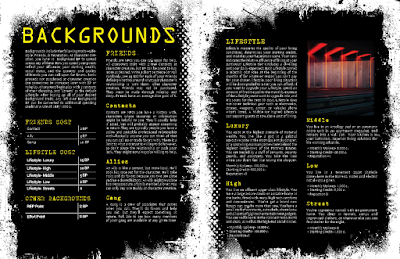 The blog will be an ongoing design journal for Chromatic Shadows my in-progress Weird Cyberpunk RPG. Also an outlet for OSR related material that's been foundering in slush folders for years. Hope to balance the gameable content with design theory stuff as the writing moves forward. Stay tuned! 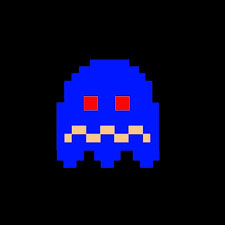 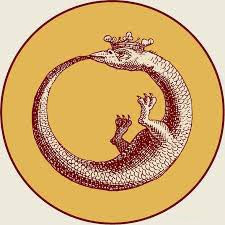